Daniel 6:4-5, “Then the presidents and princes sought to find occasion against Daniel concerning the kingdom; but they could find none occasion nor fault; forasmuch as he was faithful, neither was there any error or fault found in him. Then said these men, We shall not find any occasion against this Daniel, except we find it against him concerning the law of his God.” 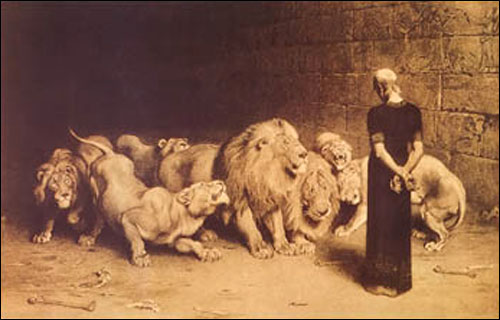 A group of evil men went to king Darius, appealing to his human vanity, and gave the king a decree forbidding anyone from petitioning any other God or man than Darius. The king loved it, not realizing entirely what the law meant.

Boy this reminds me of America today. So many people think that laws, such as the Patriot Act, are written into law for their own good (as did Darius); but there was a HIDDEN agenda. Little did king Darius know that Daniel prayed to the God of Israel 3-times daily. And so Daniel's enemies found fault in him, by concoct a bogus law to persecute Daniel.

Those men were malicious, hateful and evil. They wanted Daniel to be eaten by hungry lions, torn to shreds and mercilessly devoured. But God delivered Daniel, and his enemies were eaten by the lions instead, and their wives and children. Their hatred backfired on themselves, which is always the case when someone attacks a man of God. The Bible says even their bones break, as the lions devoured them alive (Daniel 6:24).

Just as the God of the Bible delivered Daniel from the hands of the wicked, so will God deliver us today from the hands of wicked men. We are on the winning side in Jesus Christ. Daniel broke the law, because the law had become evil.

Sadly, we are nearing the point of no return in America, when Christians will be arrested and imprisoned for taking a public Biblical stand (Ephesians 5:11) against homosexuality, abortion and false religion. Christian leaders who teach that believers should always submit to government based on Romans 13 are blind to reality, and to the truth of the Scriptures. Did Daniel sin by praying when the law forbad him to do so?

The Bible says that Paul was arrested and brought to court for teaching the public TO WORSHIP GOD CONTRARY TO THE LAW . . .

Acts 18:12,  “And when Gallio was the deputy of Achaia, the Jews made insurrection with one accord against Paul, and brought him to the judgment seat, Saying, This fellow persuadeth men to worship God contrary to the law.”

It is a dangerous thing when a government establishes laws concerning how God is supposed to be worshipped. There is talk going on today at the United Nations, and in the United States, about making a law which forbids anyone from hurting other people's feelings by criticizing their religious beliefs. In effect, they want to silence Christians. This is nothing new, for the law forbade anyone from worshipping the God of the Bible in Paul's time. Paul taught the Bible instead, disobeying man's law, and some people got mad, calling the authorities and demanding that Paul be punished for going CONTRARY to the law. Did Paul sin by GOING CONTRARY TO THE LAW?

Please read, The Stoning of Stephen.

Nothing has changed today from Daniels' time, and Paul's time. God never changes (Malachi 3:6). Both Daniel and Paul broke the law, by continuing to do what was right in the face of strong adversity. Jesus prophesied that the time will come when wicked men will kill Christians, thinking they are doing God a favor. John 16:2, “They shall put you out of the synagogues: yea, the time cometh, that whosoever killeth you will think that he doeth God service.”

Shadrach, Meshach, and Abed-nego all broke Nebuchadnezzar's law, refusing to bow to his 90-foot golden idol (Daniel 3:12). They broke the law! I am not advocating anarchy; I am saying that there often comes a time when government goes too far, forcing us to choose between obeying God or submitting to man. The Bible gives us plenty of examples of men who stood for God, even in the face of extreme opposition. Anyone can do right when it's popular and convenient; but it takes a brave soul and a faithful Christian to do right when it costs a great price, is unpopular and brings harsh persecution. Being a faithful Christian is going to increasingly become costly.

It is tragic that our youth have been exploited as paid mercenaries in the U.S. to do the dirty-work of the corporatist Globalists. Since OUR government does what they do, in OUR name, and with OUR money, and OUR children, it is OUR business!!!

“And remember this, the knuckle-draggers, the guys who are actually out in the field doing it, they cannot question anything. They're given orders and they're required to carry out their mission. It is our job as citizens to question what we're doing with our young that are serving and wearing the uniform. It's patriotic! Don't let anyone tell you different! If you stand up against a war of putting our men and women in danger, that is not an act of treason, it's an act of patriotism!” —Governor Jesse Ventura, “The Alex Jones Show,” July 16th, 2015 episode

As believers, we should never want to break the law, nor look for opportunities to break the law as the wicked do. Instead, Christians should have the resolve to please God, even if it means standing up to government tyranny by continuing to please God, going contrary to man's laws. Daniel did the right thing to keep praying. Shadrach, Meshach, and Abed-nego did the right thing by refusing to commit idolatry. The Apostle Paul did the right thing by teaching the Word of God, even though it had been banned as hate-speech. The Bible says that the Antichrist will make it a law for the world to worship him or be killed (Revelation 13:15).